I found it very worthwhile to invest in one, then several, copper foiling machines. Although like most things I found that they have their ‘quirks’ and it take some time to get used to them, they do end-up saving great deal of time and improve accuracy no end. 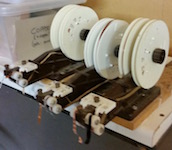 I opted for the Diegel foiler. I particularly like the ‘pin’ it uses , so that you can decide whether you want the foil centred or off-centred on the glass edge.

Why several foilers ? Well each takes two independent rolls and can be set up for particular widths of foil. I have permanently loaded foils as 7/32 copper backed, silver backed and black backed and the equivalents for 3/16 foils too.

(I found that ‘hand foilers’ have their place too but found them a bit too ‘fiddly’ for general use. Having said that having had to make a repair to the centre of a  large panel hand foilers were brilliant for re-applying foil around the glass bordering the hole. Because of that I have 4 hand foilers with the most common foils loaded up ready for use too).